An assembly is when the school community, or a part of it, meets together to share aspects of life that are of worth. It acts as a medium for communicating matters of significance from one generation to another.

Virtual Tour to the Places of Worship ( KG )

“The soul of religion is one, but it is encased in a multitude of forms.”

In order to bring in the feeling of unity and “oneness” in the hearts and minds of our little Goenkans, the KG children were given an opportunity to have a virtual tour to the worshipping places of Hindus, Christians,Sikhs and Muslims on 27th November 2020.

The tiny tots were shown the four places of worship which are Temples, Gurudwaras,Mosque and Church. The tour started at 9.30 AM. The children were taken to the Kedarnath temple where they were educated on the name of the God, the ways of worshipping and the holy book of Hindus which is the Bhagwat Gita. Then they travelled to the Dargah and told about “Quran “ the religious book of Muslims.. Following this, they were taken to the Church where they exhibited great eagerness to know how people worship in church. The teachers explained that Lord Jesus or Mother Mary is being worshipped there and that the “Bible” is the holy book of Christians. Thereafter, children went on a virtual tour to the Golden Temple, Amritsar and learnt about worshipping of Guru Nanak Dev Ji and the holy book of Sikhs ie. Guru Granth Sahib. Thus, the children showed a great enthusiasm, respect and an eagerness towards all religions

The day was followed with a talk show on the current pandemic situation caused by COVID-19, wherein children were demonstrated with hand wash activity , wearing of mask and sanitizing of hands. Thus, children were told about various do’s and don’ts to be followed during pandemic. After that, a flameless cooking session was undertaken where our little chefs made scrumptious Monaco bites and served it to their family members as well.

Towards the tail end of the day, the tiny tots enjoyed to the core the boogie session wherein they shook their legs on their favourite dance number. Thus, in all the day was a real fun and frolic for our little kids who got mesmerisised.

“Those who have loved are those that have found Go”

The birth anniversary of Guru Nanak Dev Ji was celebrated with great enthusiasm and fervor virtually by our young Goenkans of Grade KG on 26 November 26, 2020.

The day commenced with the prayer to seek the blessings of almighty. Thereafter, the children were told about the first Guru of the Sikh religion Guru Nanak Dev Ji and that the religious book of Sikhs is known as Guru Granth Sahib and the devotees go to Gurudwara to invoke the blessings of almighty. They were also told that we should follow the path of universal brotherhood and harmony which are the key principles of Sikhism. The children looked very impressive as they were dressed up in kurta- pyjama/ Salwar- suit. They expressed their views on the religion through a speech and reciting of “EK ONKAR”. Towards the tail end of the assembly the children even enjoyed watching a video on the significance of Gurpurab and understood the meaning of the 5 K’s of Sikhism ie. Kesh, Kara, Kachera, Kirpan and Kanga.

Thus our tiny tots got really mesmerized with the celebration and understood the importance of sharing is caring and brotherhood.

Wishing a very happy Gurpurab to all.

“Life should be great rather than long.”

India observes Constitution Day on November 26 every yearDr. B R Ambedkar, who was the chairman of the drafting committee was the father of our Indian constitution.

A special E- Assembly was conducted in Grade Nursery on the
occasion of Gurupurab/ Guru Nanak Jayanti.
Started with the story of Guru Nanak dev ji who was the first sikh
guru of sikhs and the founder of Sikh religion. He was born on the full
moon day in the month of kartik.
The three principals were discussed which were formalised by GURU NANAK DEV JI :-

Children were told how the Gurudwaras are decorated on the special
occasion and were told on this day men, women and children
participates selflessly in KARSEVA wherein they cook and serve Langar
and sweets which is also known as *Guru ka Langar* with Karah prasad.
It was an informative and fruitful session for the children.

“Let each Diya you light bring a glow of happiness

on your face and enlightened your soul”

E-Diwali, the festival of lights that enlightens the hearts and brings joy to everyone was celebrated by young Goenkans of grade KG on 12’th November 2020.

The day began with a meaningful prayer highlighting the message of Diwali, invoking God’s blessings as a part of virtual assembly. Children were dressed up as various characters from Ramayana and through the role play gave an insight on the transition of things from those times to the current pandemic time. The tiny tots also showcased the spirit of Diwali through a mesmerizing dance performance along with a short melodious poem.

The children continued their joy with candle decoration activity. The day concluded with a virtual Diwali e-party and the message of a clean, peaceful and a bright Diwali was shared.

Wishing a happy, joyous and prosperous Diwali to all!!!

“Celebrate the victory of the forces of good over evil .Let’s celebrate an auspicious day to begin new things in life.”

A weeklong celebration on an account of Dussehra was conducted to celebrate the festival.

Day 1: Talk about the birth of Lord Rama and his journey from Ayodhya to Lanka.

Day 2: Craft Activity-Making of a quiver with arrow.

Little Goenkan’s enjoyed the activity of making the weapon of lord Rama.

Word of the day- Archery

Meaning- Practice of shooting with bow and arrow.

Day 3: Talk about the triumph of good over evil and free hand drawing of a Dussehra scene in art file.

Word of the day- Triumph

Meaning – A great victory or achievement.

Day 4: To embrace the tradition and culture the assembly on festival ‘Dussehra’ was conducted, where children were dressed in ethenic attire. Children made effigy of Ravana and enjoyed dandiya dance.

Word of the day- Achievement

Meaning- a thing done successfully with effort, skill or courage.

“Be the change you want to see in the world”

A weeklong celebration on account of Gandhi Jayanti was conducted to celebrate the birth anniversary of the “Father of our Nation” – Mahatma Gandhi.

Day 1: Talk about who was Mahatma Gandhi, importance of 02nd October and why was he known as the ‘Father of the Nation’ was done through discussion and related videos.

Word of the day- Nation

Meaning- a country or all the people in a country

Day 2: Introduction to the three wise monkeys of Gandhi Ji and their teachings were discussed through PPT and videos.

Word of the day- Wise

Word of the day- Spin

Meaning – To turn or to make something turn quickly, to make yarn or thread from fibres.

Day 4: An assembly on ‘Gandhi Jayanti’ was conducted wherein discussion about all the details discussed during the entire week was reinforced. Children enjoyed dancing on the song “Bande mein tha dum” and made beautiful “charkha” craft. Also few of the children did Enactment of Gandhi Ji.

Meaning- the use of peaceful means.

“A teacher takes a hand, opens a mind and touches a Heart.”

A teacher’s purpose is not to create students in his own image, but to develop students who can create their own image.

Moving forward, role play activity of Enactment of your teacher was done by our Goenkans who were dressed up in their favourite attire and shared their thoughts with everyone.

Special appreciation E-Badges were also given to all the students as a gesture of love from their teachers followed by the dance session wherein children enjoyed tapping their feet on different songs along with their peers and teacher. 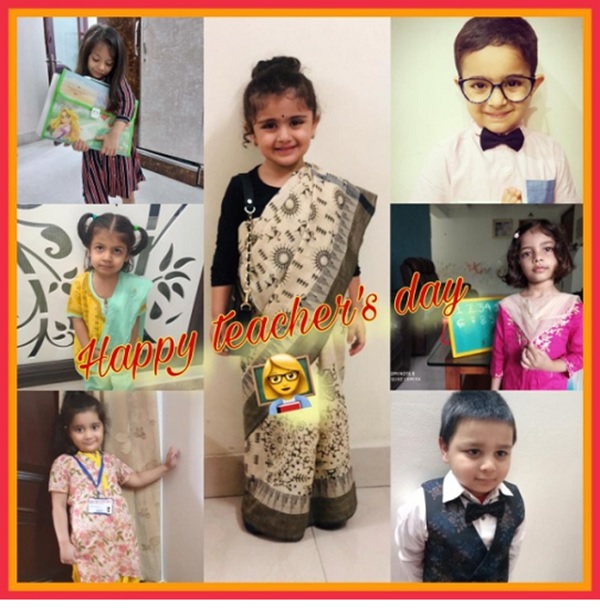 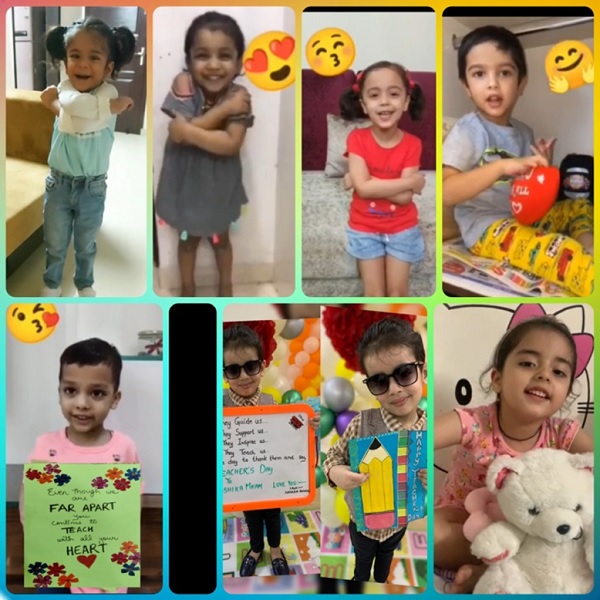 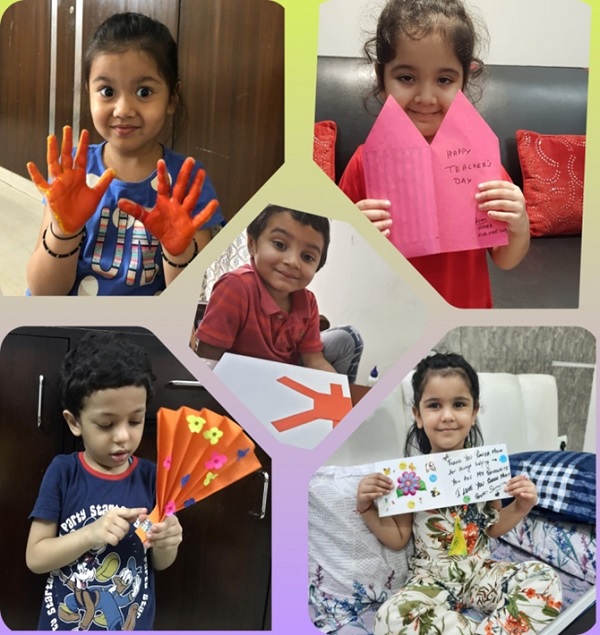 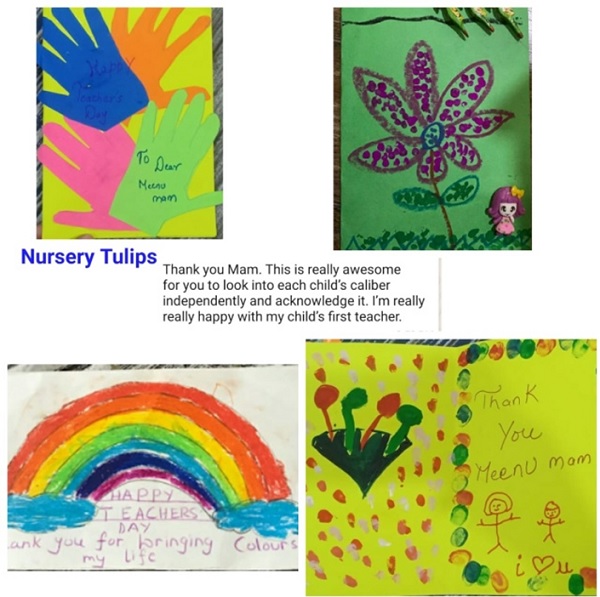 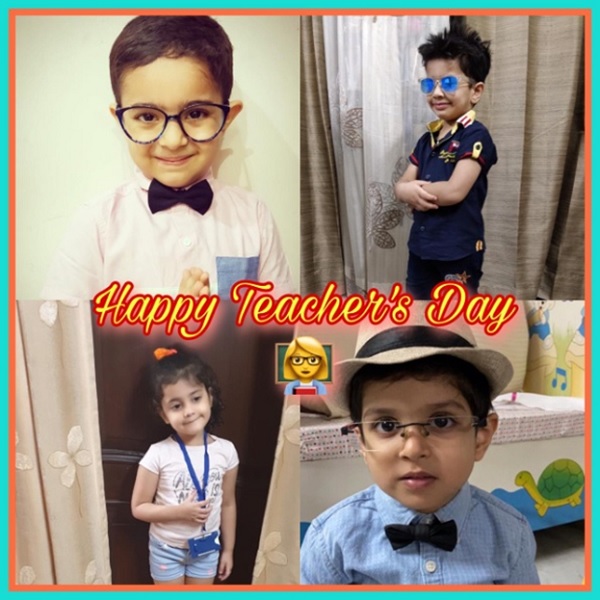 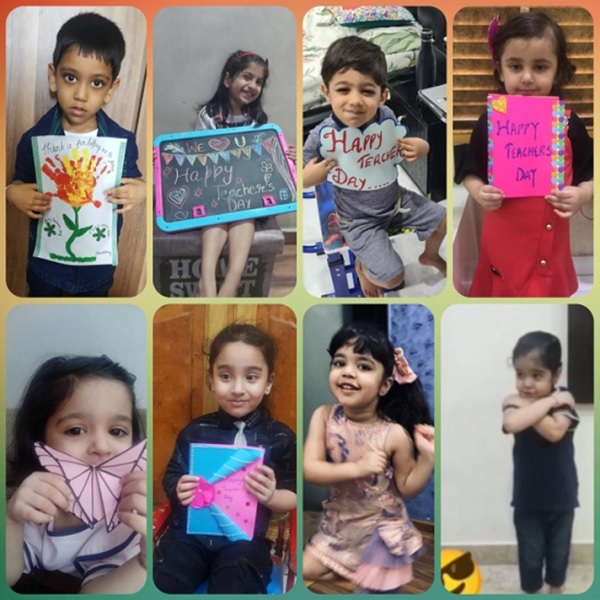